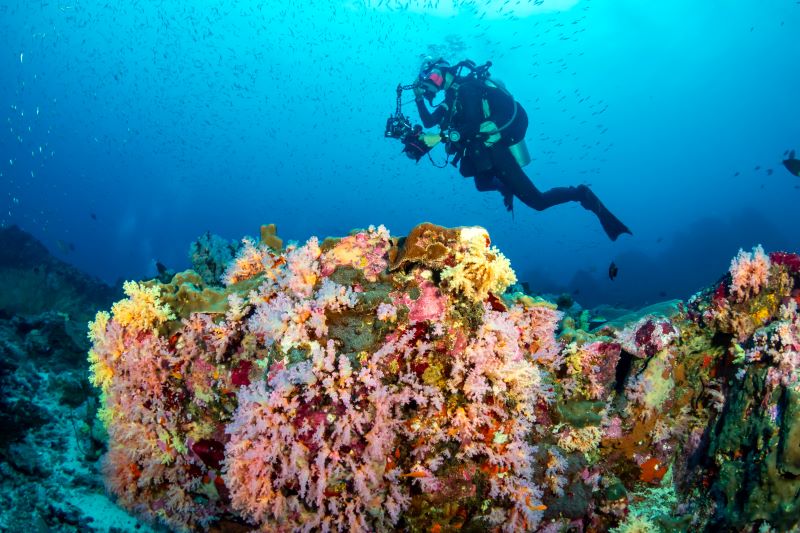 You might have heard people discussing marine conservation in relation to protecting the environment as a whole, but what does it actually involve and why is the work so essential?

What is marine conservation?

There are plenty of marine conservation projects around the world and some of the work is funded by environment-focused charities. Marine conservation work will often involve qualified professionals who are knowledgeable in species preservation as well as restoring damaged ecosystems. It typically involves a lot of research which needs to be funded.

There are also actions that individuals can take to help with marine conservation, such as taking part in beach clean-ups or sponsoring the adoption of turtles or dolphins. We take a look at the ways you can support marine conservation later in the blog, but first we want to outline its importance.

Why is marine conservation important?

The oceans make up most of our planet

The ocean is the largest ecosystem on earth and the planet’s life support system. Three-quarters of planet earth is covered by oceans, they make up 99% of the living space on Earth by volume and they contain 97% of the planet’s water.

They are home to a variety of wildlife

There are currently hundreds of thousands of known species in the oceans, and scientists estimate that we are yet to discover over 90% of species in the marine environment, meaning there could be as many as two million!

We often forget how much we directly depend on our natural environment but, according to the UN, over three million people depend on marine and coastal biodiversity for their livelihoods and marine fisheries employ over 200 million people, whether that’s directly or indirectly.

However, human activity has caused real destruction to the oceans and it is estimated that 60% of the world’s major marine ecosystems that underpin livelihoods have been degraded or are being used unsustainably.

They are thought to contain plants beneficial for medicine

Scientists have extracted over 10,000 compounds from marine environments for use in medications, medical treatments and biomedical research.

They are integral for climate change

A healthy ocean is necessary in order to reduce the effects of climate change and should therefore be a priority. Whilst human activity has increased greenhouse gas emissions in the atmosphere, the oceans have been integral in moderating these effects. It is believed that the oceans absorb over 90% of the excess heat and approximately 30% of excess carbon dioxide emissions produced by humans.

Preservation of ocean life is essential for preserving all life on earth, including the lives of humans.

What are the current threats to marine life?

The major threats to marine life and ecosystems include:

Although the oceans are incredible when it comes to absorbing the emissions and excess heat caused by human activity, this does not mean that they are unaffected by the changing climate. In turn, this is causing the oceans to warm and there have been widespread marine heatwaves, which damages the wildlife and habitats within the oceans.

Plastic pollution is a particularly big issue when it comes to marine life. It is estimated that 8 million metric tonnes of plastic end up in the oceans every year, which harms and even kills marine life. There are many charities who are working to reduce the plastic that ends up in seas, such as WWF, but it is also important to take some personal responsibility when it comes to plastic usage.

The fishing industry has become unsustainable and many species of fish are now at risk. There has been a rise in illegal fishing, and the current methods of fishing mean that many other creatures are injured in the process, such as when dolphins are killed in fishing nets or hooks.

People across the world rely on fish as a source of protein, but the current situation means that this food source is under threat. Many charities and organisations across the world are therefore working to make fishing more sustainable, which will ensure that destructive fishing methods are eradicated in favour of an industry which limits habitat destruction, guarantees fish populations in our oceans and means that people can maintain their livelihoods.

Marine habitats are being destroyed by climate change, unsustainable fishing and pollution, but they can also be destroyed by human development, dredging, the impact of shipping and more. It is essential that governments put more protections in place for these marine environments, and this is something that charities such as WWF are campaigning for.

How can you help support marine conservation?

As we’ve mentioned throughout this article, charities like WWF are doing fantastic work when it comes to marine conversation. You can donate to WWF directly, become a member or even adopt an animal!

However, if you don’t have the funds to spare, one of the simplest ways you can continue to support WWF on a regular basis is by using SearchScene as your primary search engine. We give you the option to choose the charities you want to support, and these include WWF. We then donate 95% of our profits to the charities users choose!