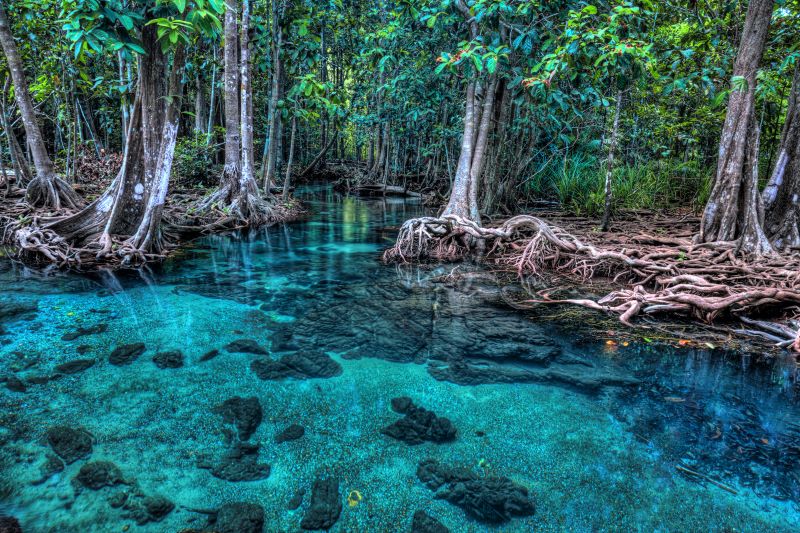 There are many fascinating species of trees around the world, and some exist in very unique and unusual circumstances. All these variants of trees have important benefits in preserving life on Earth and fighting climate change. In this article, we look at what mangroves are and why they are so important.

Mangroves are tropical trees that thrive in salty coastal waters. They have tangled roots that grow above ground and form dense thickets.

They are the only type of tree in the world that can survive in salty water. Estimates vary, but there are between 50 and 110 different mangrove species, ranging in height from 2 to 10 metres.

They can be found in 118 countries around the world on the saltwater coasts. Indonesia has the largest amount of mangrove cover with 23,000 square kilometers of forests.

Why are mangrove forests important ecosystems?

Mangroves have the ability to store vast amounts of carbon which is vital as we combat climate change. This is why mangrove-planting projects are so essential, and why we need to ensure that destruction of mangroves is limited.

Mangroves are also very important for protecting our oceans and shorelines. Mangrove forests are home to a large variety of fish, crab, shrimp, and mollusk species. Their roots create an underwater habitat for marine life on the coasts, often acting as ‘nursery areas’ for young fish, keeping them safe from threats.

The trees trap sediment and pollutants that would otherwise flow out to sea. Seagrass beds provide a further barrier to silt and mud that could smother coral reefs.

For communities that live close to the shore, mangroves are an essential safety barrier. They act as a natural buffer against storms and extreme weather events, which are only increasing with climate change. In areas where mangroves have been cleared, coastal damage from hurricanes and typhoons is much more severe.

What are the threats to mangroves?

One of the main threats to mangrove forests is shrimp farming. Hundreds of thousands of acres of wetlands where mangroves live have been cleared in order to make room for artificial ponds that are stocked with shrimp. This then affects the water quality and flow along the coastlines, so that mangroves can no longer survive here, even after the ponds are cleared.

Shrimp farm activity alone has been responsible for the loss of 38 percent of the world’s healthy mangroves and the percentage climbs to 52 if all agricultural activities are counted.

Indonesia has lost over 40% of its mangrove forests, affecting not only the environment and the species that rely on them but also the communities that depend on this ecosystem for survival.

Coastal development projects have also led to vast amounts of mangroves being cleared to make way for new properties, hotels and more. This is incredibly damaging to coastlines and also harms the planet as a whole, since we rely on trees like mangroves in the fight against climate change.

Sadly, climate change is also changing the oceans at a fast rate, which is having an impact on mangrove populations. Sea levels are rising and the chemistry of the oceans is shifting and soon mangrove forests won’t be able to adapt to survive in the new conditions.

In order to preserve our planet, we need to make sure that we are looking after mangroves, rather than destroying them.

How can we protect mangroves?

Many mangrove forests have sadly already been destroyed, but Eden Reforestation Projects are working to restore these trees in countries across the world.

As we mentioned earlier, Indonesia has a large number of the world’s mangroves, which is why this country is the base for many of their key projects.

According to Eden Projects, in the last 3 decades, Indonesia has lost over 40% of its mangrove forests, affecting not only the environment and the species that rely on them but also the communities that depend on this ecosystem for survival. They have now planted over 30 million trees in Indonesia.

Madagascar is also home to many mangrove estuaries, and Eden Projects have been working to reforest these vital ecosystems. Since they started work here in 2007, they have planted over 400 million trees.

You can support the incredible work that Eden Projects is doing simply by switching to SearchScene as your main search engine! We donate 95% of our profits to charity and we allow our users to choose which charities they wish to donate to.